Some of the cookies used are essential for parts of the site to operate.

The State of Nevada has lifted mask mandates. READ HERE 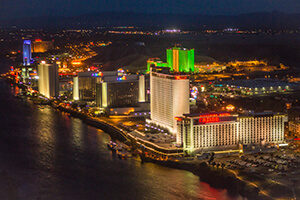 Pitbull, proving his international prowess, the rapper, singer and producer has had countless worldwide hits including “Timber,” which topped the charts in 15 different countries. He has earned countless awards, dozens of international number ones, hundreds of gold and platinum certifications, millions of single sales, 25 million album sales, and cumulative video views in excess of 15 billion.

A crowd favorite and frequent performer in Laughlin, Waffle House Legend Award winner Kid Rock is a multi-platinum American rock ‘n roll icon. His music has been characterized as a melting pot of musical genres; from rap-rock in the ‘90s with singles “Bawitdaba” and “Cowboy,” to the multi-chart hit “Picture,” a collaboration with Sheryl Crow that charted at No. 4 on the Hot 100, to the global smash hit, “All Summer Long,” which charted at No. 1 in eight countries across Europe and Australia. He has sold almost 30 million records worldwide and has earned a reputation as one of the hardest working acts in rock n’ roll, blowing the roofs off arenas and stadiums on countless cross-country tours and treks around the globe. He holds the Michigan record for most tickets sold with 150,000 for a run of ten consecutive sold-out shows and set the Little Caesars Arena attendance record in his hometown of Detroit with 86,893 attendees in six sold-out shows. His newest album, Bad Reputation, was recently released in conjunction with his 2022 tour. Rock is also a passionate supporter of those who serve in the US Armed Forces, in addition to many other charitable causes.

As the No. 1 best-selling duo of all time, Daryl Hall and John Oates have left a legacy and impact on the music industry that can be heard far and wide. To this day, they continue to be one of the most sampled artists of all time with an impressive catalog of songs, including six No. 1 singles and six consecutive multi-platinum albums. The duo’s collection of hit songs include “Kiss on My List,” “Private Eyes,” “Maneater,” and “Rich Girl,” among others. Since stepping onto the music scene in 1970, Hall & Oates has reached the US Top 40 on Billboard’s Hot 100 list with 29 out of 33 singles. They’ve celebrated numerous accolades and major milestones, including an induction into the Songwriters Hall of Fame in 2003 and the Rock and Roll Hall of Fame in 2014, a star on the Hollywood Walk of Fame in 2016 and hitting one billion streams of their classic hit, “You Make My Dreams (Come True),” in 2020.

In October 2021, Toby Keith released a new studio album, Peso In My Pocket, that led with “Old School,” the single that debuted at the highest radio entrance on Billboard’s airplay chart. In 2018, he celebrated the 25th anniversary of his debut No. 1 single, “Should’ve Been a Cowboy,” with the re-release of his remastered debut album with the addition of three vault tracks. Keith has sold more than 40 million albums, more than 10 billion streams, 98 million BMI performances, and has 32 No. 1 hit singles. He has written a No. 1 hit every year for 20 straight years, including “Who’s That Man,” “Me Too,” “How Do You Like Me Now?!,” “You Shouldn’t Kiss Me Like This,” “I’m Just Talkin’ About Tonight,” “Courtesy of the Red, White, & Blue (The Angry American),” “Who’s Your Daddy?,” “Beer For My Horses,” “I Love This Bar,” “American Soldier,” “Whiskey Girl,” “As Good As I Once Was,” “She Never Cried in Front of Me,” “God Love Her,” and “Made in America.”